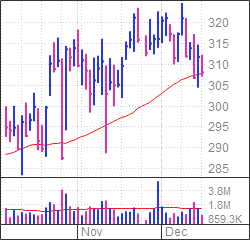 Vertex Pharmaceuticals (VRTX) is the IBD Stock Of The Day. The Food and Drug Administration signed off on its newest study in cystic fibrosis, but VRTX stock is trading sideways.


This week, the FDA said Vertex could begin testing its messenger RNA-based approach to treating cystic fibrosis. The drug comes out of a collaboration with Moderna (MRNA) that began in 2016. If successful, it would yield a treatment for roughly 5,000 people who don’t respond to traditional drugs.

“Clearance of the (application to begin human studies) represents a pivotal turning point in reaching the remaining about 5,000 people with CF who are still waiting for a medicine to treat the underlying cause of their disease,” Vertex Chief Executive Reshma Kewalramani said in a written statement.

Now, VRTX stock is trying to find support at its 50-day moving average after breaking out of a flat base with a buy point at 306.05 in October. Shares later tumbled as much as 6% below that entry, though that wasn’t enough to trigger a sell rule. Shares are now in the 5% buy zone.

Vertex is well known for its cystic fibrosis medicines. These drugs aim to correct abnormal proteins made by a mutated gene called CFTR. The company makes four drugs designed for different mutations. The last iteration of Vertex’s cystic fibrosis drugs works in 90% of people with the disease.

But the last 10% of people don’t make enough of the CFTR protein to regulate. Instead, the companies are testing an inhaled drug that delivers treatment directly to the lungs.

Critics have noted that other efforts to deliver inhalable cystic fibrosis treatments haven’t borne out. Translate Bio used an mRNA approach to deliver an inhaled treatment. In early 2021, the company said patients didn’t show improvement in their ability to forcefully exhale — a measure of the disease. Sanofi (SNY) has since acquired Translate Bio.

VRTX stock dipped on Tuesday, when it announced the FDA’s decision to allow the company to test its inhaled CF treatment in people. That came as biotech stocks broadly lifted 1%, according to MarketSmith.com.

Investors are keenly focused on Vertex’s moves outside cystic fibrosis. The next big catalyst there is when Vertex and Crispr Therapeutics (CRSP) finish filing for approval of their CRISPR-based gene-editing treatment for sickle cell disease and beta thalassemia. That’s expected early next year.

A number of companies are testing similar approaches to sickle cell disease because the genetic cause is well known.

But an update at the American Society of Hematology meeting over the weekend “largely (affirmed) our expectations of first-to-market/leading share position,” SVB Securities analyst Mani Foroohar said in a report early this week. Fellow SVB analyst David Risinger has a market perform rating on VRTX stock.

Vertex is also working on treatments for diseases of the liver and kidneys, Duchenne muscular dystrophy and type 1 diabetes.

Investors should be wary of new buys right now. But VRTX stock could offer a new opportunity if it rises above Wednesday’s high at 314.80. That would coincide with a jump above the 21-day moving average.

Vertex stock has a perfect Composite Rating of 99, according to IBD Digital. This puts shares in the top 1% of all stocks when it comes to technical and fundamental measures. Shares also have a strong Relative Strength Rating of 94, meaning their 12-month performance lands in the top 6%.

The Bullish Call Eli Lilly Made For Its Next-Gen Obesity Drug, A Rival To Novo, Amgen

Looking For The Next Big Stock Market Winners? Start With These 3 Steps

Profit From Short-Term Trends With SwingTrader