PROGRAMMING NOTE: We’ll be off next week for the holidays but back to our normal schedule on Tuesday, Jan. 3.

LOOK ON THE BRIGHT SIDE: Some of the most vocal advocates of antitrust bills to rein in dominant tech companies are beginning to regroup after two of the movement’s marquee pieces of legislation failed to make it to the finish line this Congress, and they see promise in what measures are moving forward.

— “I guarantee you that Big Tech lobbyists were losing sleep over this, like, up until today,” Evan Greer, the director of the digital rights group Fight for the Future, said in an interview earlier this week about the exclusion of tech antitrust bills from the package.

— Greer and other advocates who — thus far unsuccessfully — pressed lawmakers to adopt bipartisan bills aimed at forcing companies like Apple and Google to loosen control over their app stores or blocking tech giants from promoting their own products over their rivals’ on their platforms are finding other reasons to be optimistic as Congress prepares to go home for the year.

— “When we started over three years ago, people said there’s no chance in hell any of these bills will pass. And three key bills are on the cusp of passing,” said Mike Davis, a former Senate Judiciary aide who runs the conservative Internet Accountability Project.

— The spending package that passed the Senate this afternoon contains provisions that will provide antitrust enforcers with more funding and will allow state attorneys general to bring antitrust cases in friendlier jurisdictions, which Davis described as “critical first steps” for reining in tech companies and bringing conservatives into the fold — a key constituency with Republicans poised to control the House next year.

— The American Economic Liberties Project’s Matt Stoller said in an email to PI that he rejects the notion that antitrust reforms didn’t make it into the omnibus. Sacha Haworth, the head of the Tech Oversight Project, also cautioned against downplaying that win, telling PI that “the most significant antitrust reform in the last 50 years will have passed in this omnibus, and that’s no laughing matter.”

— Advocates are also finding comfort in the broad coalition they assembled that managed to more or less hold its own in the face of hundreds of millions of dollars in spending from tech companies and their outside groups, who at the end of the day are still facing threats to their dominance in numerous venues.

— “Through this intensive lobbying effort over the last two years, we’ve created a coalition,” Haworth said. “It’s not bound by a trade association, but it’s that same loyalty and mutual respect and mutual action.”

— Davis, who contended that bills like the American Innovation and Choice Online Act and the Open App Markets Act could yet pass in the next Congress despite opposition from likely House Speaker Kevin McCarthy, noted that “there’s a very rare, bipartisan, closing window of opportunity with populist Democrats and populist conservatives to come together to hold Big Tech accountable.”

— One challenge, he told PI, will be keeping Republicans from getting bogged down in debates over censorship that could tank bipartisan antitrust talks. Davis challenged lawmakers like McCarthy to “cut bait from Big Tech and get on board with the new conservative antitrust movement — we happily take converts.”

Good afternoon and welcome to PI. Which omnibus wins (or losses) are flying under the radar? Reach out: [email protected]. And be sure to follow me on Twitter: @caitlinoprysko.

It’s been a tough year for crypto. After unprecedented fraud and mismanagement, industry confidence has been shaken. As the world’s largest crypto exchange, Binance believes greater transparency is critical. At Binance, user assets are backed 1:1 and our capital structure is debt-free, and we are eager to work with regulators to help bring order to the markets. Learn more about our commitment to moving forward in Politico this week.

JEFFRIES TO RUB SHOULDERS WITH K STREET: One of K Street’s top lobbying shops is moving swiftly to stay close with the new generation of Democratic leadership in the House. Nearly a dozen Democratic lobbyists from Invariant are set to hold a fundraiser later next month for Rep. Hakeem Jeffries (D-N.Y.), who is set to become the House minority leader in a matter of days, according to an invitation for the event obtained by PI.

— Heather Podesta, the firm’s founder, has long been a reliable fundraiser for the party. She’ll host the fundraiser, which is set to feature other House Democrats and is set to benefit the DCCC, alongside Teal Baker, Quincy Enoch, Maia Hunt Estes, Ben Klein, Noah Kowalski, Anne MacMillan, Eric Rosen, Mary Beth Stanton and Nicole Venable, according to the invite.

— Invariant, whose lobbying revenues consistently land it among the top-grossing firms in Washington, boasts a roster of big-name clients who, naturally, would be thrilled to hobnob with top House Democrats — including Apple, Circle, Cigna, the American Council Of Life Insurers, Home Depot, Hearst Corporation, PepsiCo, SpaceX and the American Chemistry Council.

— “The business group, which typically spends more than any other entity on federal lobbying, has found itself at odds with House Republicans over endorsements of legislation and Democratic candidates in recent years. Months ago, House GOP leaders said they would refuse meetings with the group.”

— “With the slim majority House Republicans will have in the 118th Congress and given that Minority Leader Kevin McCarthy has not locked in the votes from his own conference to become speaker, House GOP leaders have been quieter of late about their views on the chamber. The business group says it’s focusing on its relationships with lawmakers, including newly elected Republicans, who want to broker legislative deals and solve problems to make the economy stronger.”

— “In the new Congress, the dynamics between House Republicans and the U.S. Chamber of Commerce, and more broadly the nation’s business community, will likely expose conflicts as well as present opportunities for alliances. The relationship could prove pivotal for whatever the divided Congress does, or does not, accomplish.”

FILLING THE RANKS: “Eric Schmidt, the former CEO of Google who has long sought influence over White House science policy, is helping to fund the salaries of more than two dozen officials in the Biden administration under the auspices of an outside group, the Federation of American Scientists,” our Alex Thompson reports.

— “The revelation of Schmidt’s role in funding the jobs, the extent of which has not been previously reported, adds to a picture of the tech mogul’s growing influence in the White House science office and in the administration — at a time when the federal government is looking closely at future technologies and potential regulations of Artificial Intelligence. Schmidt has become one of the United States’ most influential advocates for federal research and investment in AI, even as privacy advocates call for greater regulation.”

— Even as Schmidt and the White House defended the arrangement — made possible by a 50-year-old law — and downplayed Schmidt’s potential influence or motives, “a POLITICO investigation found that members of the administration are well aware that a significant amount of the money for the salaries of FAS’s fellows comes from Schmidt’s research and investment firm, Schmidt Futures, and that the organization was critical to the program to fund administration jobs. In fact, the influence of Schmidt Futures at FAS is such that they are sometimes conflated.”

— And as CNBC reported earlier this month, “Schmidt’s intense support for AI dovetails with some of his personal business and philanthropic efforts, which has put him in the crosshairs of watchdog organizations and, most recently, Sen. Elizabeth Warren (D-MA).”

— CEO Janet Trautwein, who has led the organization for more than 25 years, told Megan the outdated name goes back to the association’s founding about 100 years ago. Over the years, the association has been working to expand its membership to include many of the roles involved in health insurance and benefit plans, including agents, brokers, consultants administrators and technology platforms — now representing more than 100,000 people.

— “We had to make some changes to better describe ourselves,” Trautwein said. “For a long time — at least the last 15 years — we’ve had to explain to people, what is a health underwriter? And you could spend the first 5 or 10 minutes talking to someone, trying to explain what it is — when, really, it’s just health plan professionals, employee benefits professionals.”

— The rebranding also comes with a new slogan, “Shaping the future of health care,” which Trautwein says is a reflection of its advocacy interests. “We look a lot at what can we do to make sure that health care is accessible and affordable for people moving into the future so that it’s available to everyone, regardless of what their income level is,” she says.

CLARIFICATION: Wednesday’s Influence mischaracterized a top donor to lawmakers who objected to certifying the 2020 election. AT&T was the top Fortune 500 donor to those lawmakers, according to Accountable.US.

— Austin Chambers is joining Something Else Strategies, a Republican media and marketing firm, as a partner. He currently runs Main Thing Strategies and was president of the Republican State Leadership Committee in the 2020 cycle. 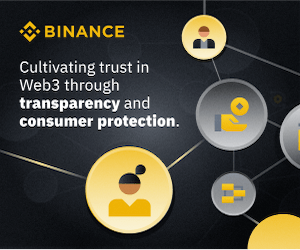 It’s been a tough year for crypto. Macroeconomic headwinds have ushered in challenging market conditions, followed by unprecedented fraud and mismanagement. The combination rocked consumer confidence and created a level of skepticism about the future of crypto. Binance strongly believes crypto’s best days remain ahead, but to get there, transparency is the only path forward. At Binance, we are investing in transparency protocols to demonstrate our strong financial health. Our capital structure is debt-free and all user assets are backed 1:1. Binance does not borrow against customers’ funds or invest them without their consent. Most importantly, we look forward to working with policymakers to better protect consumers while promoting innovation. Learn more about our commitment to moving forward in Politico this week.