Many investors believe that buying high-growth, speculative businesses is the only way to see outstanding returns over the long term. While that view has some validity, it also takes an investor who can stomach the volatility that comes with owning young, disruptive companies.

But there are stable companies out there too with steady revenue and free-cash-flow improvements that have proven to be worthwhile investments. These unsung heroes tamp down the stock price volatility by generating consistently high returns, helping you sleep better at night and remain invested. Both Apple (AAPL -1.51%) and Veeva Systems (VEEV -2.31%) fit this latter description, and each has outperformed the Nasdaq Composite index so far this year while also handily beating the index every year since 2014.

Let’s take a closer look at these two sturdy tech stocks providing relatively low volatility and see if they are worth considering for your portfolio.

Apple has only fallen 2.5% so far in 2022, which is a better performance than most indices. That’s because Apple is one of the largest businesses in the world with one of the most powerful brand names. Some estimates put Apple’s share of the U.S. smartphone market at 50%, with no rival coming close to Apple’s dominance. This has allowed the company to prosper in any environment. 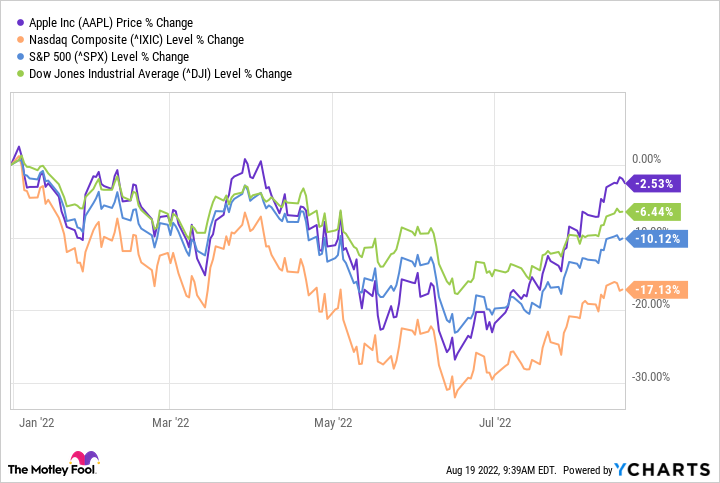 Even now, Apple is continuing to post robust results. In the company’s third fiscal quarter (ended June 25, 2022), revenue reached a Q3 record of $83 billion, which increased 2% year over year. While that might not be the most impressive expansion rate, in an environment where demand for discretionary goods (like expensive phones or computers) is dramatically falling, it shows that Apple’s brand reputation is still holding up.

However, Apple also has a few opportunities on the horizon that could help this business expand and provide strong returns to shareholders over the long term. There are rumors of Apple getting into augmented reality (AR) and virtual reality (VR) in the coming years, with products potentially on the way in 2023 and 2025. The company has hundreds of people working on AR and VR, showing that Apple is serious about succeeding in this emerging industry.

Considering the AR, VR, and mixed-reality spaces combined could be worth over $250 billion by 2028, Apple could see significant growth if it can capture some of this emerging industry. Importantly, Apple has generated over $107.5 billion in free cash flow and almost $100 billion in net income over the trailing 12 months, which can help fuel its success in this emerging space.

Apple has the right combination of business stability and speculation, which could result in attractive long-term shareholder returns. Therefore, owning Apple might help some investors sleep better at night.

Veeva is much smaller than Apple, but it has provided the same stock price sturdiness so far this year: Shares are only down 13.9% year to date, beating the Nasdaq. 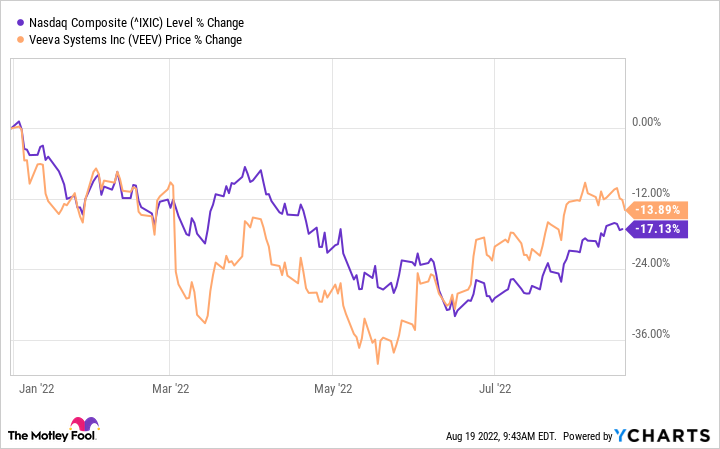 Most investors might not know Veeva as well as Apple because Veeva provides cloud-based tools for life sciences businesses. The company is the leader in the space, helping life sciences companies improve the efficiency of everything from drug testing to marketing, all while maintaining regulatory compliance.

Veeva’s tools are critical to its customers’ operations, which is why the company has reported stable results this year, despite the challenging macroeconomic environment. Revenue in the company’s fiscal first quarter (ended April 30, 2022) grew 16% year over year to $505 million. It also expects revenue of $2.17 billion for the full fiscal year — representing a steady expansion of 17% compared to the year-ago period. This is indicative of the company’s criticality and shows that Veeva expects continued adoption, even when business budgets are tightening.

Veeva also believes it has a $13 billion industry ahead of it, leaving significant room to flourish. As the top dog with a need-to-have product suite, Veeva looks poised to be the primary beneficiary of this immense potential. Importantly, it has the cash flow to invest in capturing this. Veeva has a free cash flow margin of 40% on a trailing-12-month basis, so it is — and will likely continue — generating tons of cash to make the most of this opportunity.

Shares are expensive at 50 times free cash flow, but if you’re looking for high-quality businesses with the right balance of stability and potential, there aren’t that many better than Veeva. Therefore, you might consider paying a premium for this top-notch company.

Stock Market Keeping You Up at Night? Buy These 2 Stable Tech Stocks