Every NFL game features a few key matchups that go a long way toward determining the outcome. Here are the ones I’ll pay close attention to in the divisional round this weekend:

In last season’s wild-card matchup between these teams, the Cowboys were 3.5-point home favorites. The 49ers came into Dallas and rushed for 169 yards and two touchdowns, winning 23-17. The 49ers’ offense is now even more dynamic with the addition of Christian McCaffrey, and the Cowboys’ defense, while overall still very good, remains vulnerable against the run.

The Cowboys finished the regular season ranked fourth in defensive success rate against the run, meaning they were good on a down-to-down basis. But they gave up 67 runs of at least 10 yards, fourth-most in the NFL. The 49ers, meanwhile, ranked fifth in explosive run rate (10.2 percent) from Week 8 on, once they fully incorporated McCaffrey into the offense.

The Cowboys are an aggressive single-gap team. They fly upfield to cause disruption, but when they miss, the runner can get into the secondary, where Dallas struggles to tackle. This issue is particularly problematic on outside runs — the 49ers’ specialty.

On this play, the 49ers were in 21 personnel (two backs, one tight end and two receivers), but what makes the 49ers’ 21 personnel special is that they can get into spread looks and have four viable receivers who can create mismatches. 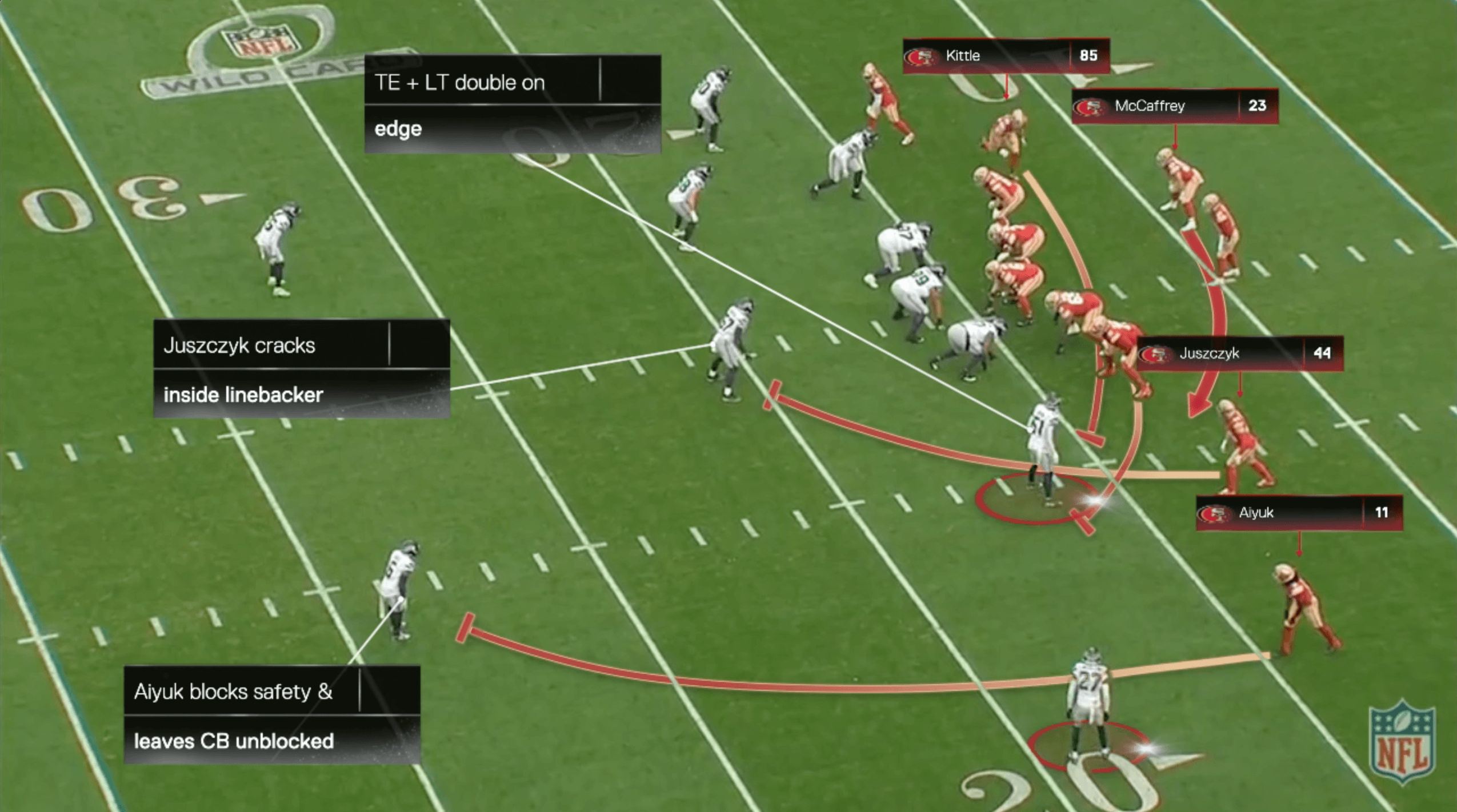 The 49ers lined up in a two-by-two formation with fullback Kyle Juszczyk in the slot. Juszczyk’s assignment was to crack the inside linebacker, and receiver Brandon Aiyuk’s assignment was to block the free safety, leaving the cornerback unblocked. Tight end George Kittle motioned to the left and doubled the left edge with left tackle Trent Williams. 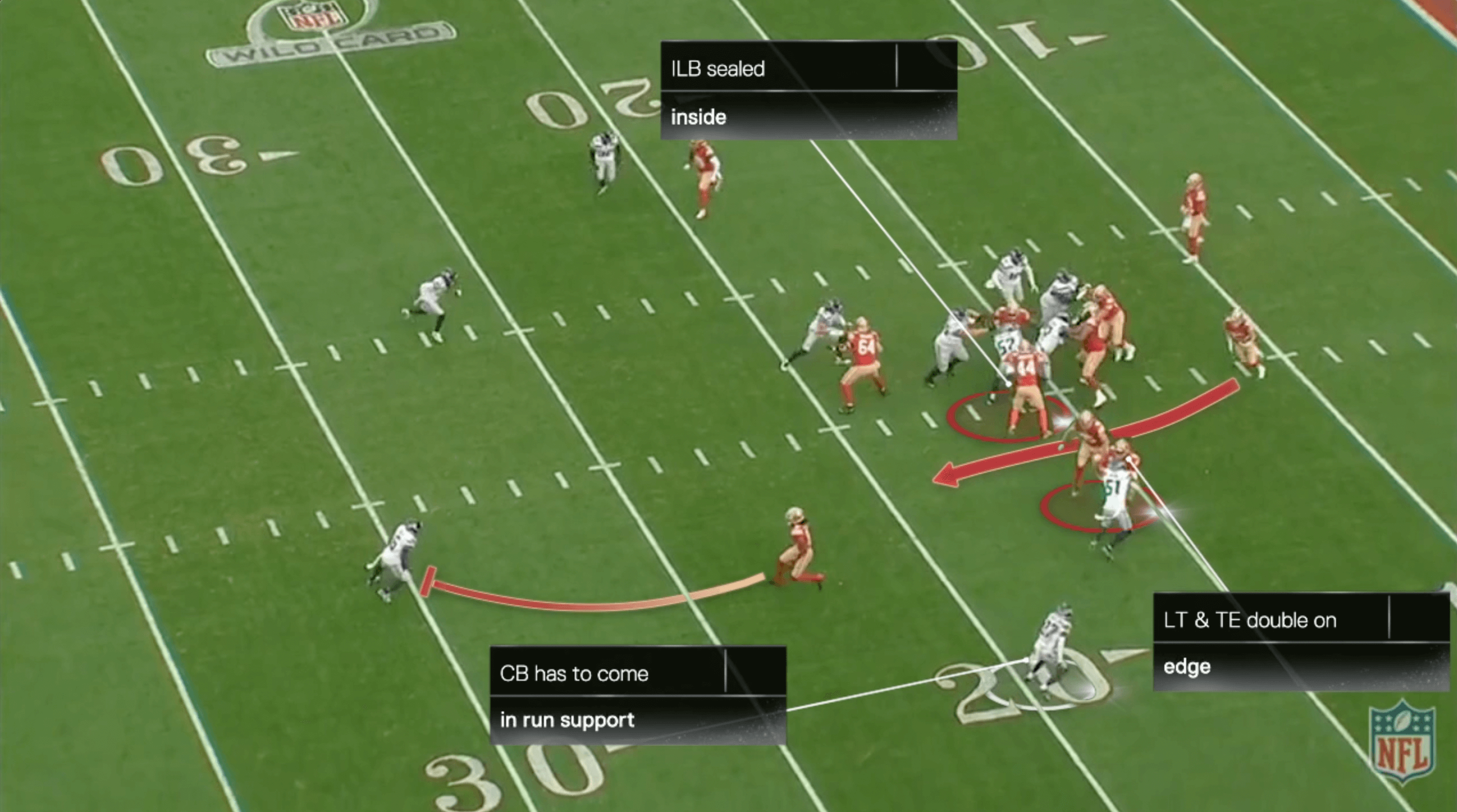 The 49ers executed to perfection and opened up a huge running lane for McCaffrey. Corner Tariq Woolen needed to step up quickly to fill the run lane, but he sat back and McCaffrey gashed the defense for 68 yards.

“Honestly, we never practiced (against) that (defensive) look before … but it was beautiful,” Juszczyk told me after the game. “Everyone adjusted really well to it, and it was an awesome crease.”

The 49ers’ run game is in sync right now, and they are going to look to attack Dallas on the perimeter and make their corners tackle — something that Trevon Diggs in particular struggles to do.

According to TruMedia, the Cowboys played a season-high 64 snaps of two-deep safety looks against the Buccaneers, and it effectively stopped Tampa from recording explosive pass plays. But the Cowboys will have to keep an extra man in the box against the 49ers, and their secondary will have to come up in run support better to limit explosive runs.

Key matchup: DeVonta Smith and A.J. Brown in the slot vs. the Giants’ slot defenders

Against the Vikings in the wild-card round, the Giants played zone coverage on 76.8 percent of dropbacks, by far a season-high for New York. The Vikings’ run game was almost non-existent, so the Giants had the luxury of playing light boxes to focus on stopping the pass. But they will not be afforded that luxury against the Eagles, who lead the league in expected points added (EPA) per rush. In Week 14, when the Giants and Eagles met for the first time, Giants defensive coordinator Wink Martindale called almost exclusively single-high coverages to stop the Eagles’ option run game, and only 50 percent of those coverages were zone looks.

Jalen Hurts, who was blitzed on 52.8 percent of his dropbacks in that game, had one of his best games as a passer this season. The Eagles created mismatches by lining up DeVonta Smith and A.J. Brown in the slot. Targeting the slot, Hurts was 7-of-12 for 115 yards, two touchdowns and four first downs. The Giants don’t really have the option to play more two-deep coverage against the Eagles this time around because they’ll get shredded on the ground if they do. They can, however, play more Cover 3 (a single-high safety look) and keep everything in front of them.

Early look at Eagles-Giants: What will keep Nick Sirianni up at night?

Martindale might continue his trend of blitzing less because his four-man pass rush featuring Dexter Lawernce and rookie Kayvon Thibodeaux has been pressuring the quarterback lately, but the Eagles have arguably the best offensive line in football. I doubt Martindale will continue to stay passive if the rush isn’t getting home. Maybe he won’t blitz as much as he did in Week 14, but I’d expect him to blitz in the 40 percent range — above league average. On those blitzes, a nickel or safety will be matched up on the slot, and I expect to see a lot of Smith and Brown there. How well those defenders contain Smith and Brown could determine the game.

Nickel corners Darnay Holmes and Nick McCloud both got burned for a touchdown each with Smith and Brown in the slot in Week 14. So who else could the Giants turn to? Adoree Jackson, the Giants’ best corner, who didn’t play in both regular season matchups with the Eagles this season. Jackson generally plays outside and doesn’t have a lot of snaps playing inside this season, but against the Cowboys in Week 3, he followed CeeDee Lamb inside in the slot in passing situations and did the same with Justin Jefferson against the Vikings at times. I wouldn’t be surprised to see him do the same with Smith or Brown in this game.

This is almost too simplistic and repetitive, but it’s true: If you can’t get to Patrick Mahomes with four rushers, you don’t stand of a chance.

It’s not just about pressuring Mahomes; it’s about containing him in the pocket, which the Jaguars did a poor job of in their Week 10 matchup with the Chiefs, which Kansas City won 27-17. The Jaguars were undisciplined in their rush lanes in the first half and let Mahomes find gaps to run through. Against the Jaguars, he scrambled on 12.5 percent of dropbacks, his highest percentage of the season, for 40 yards. Additionally, when he bought time, it led to huge plays downfield. 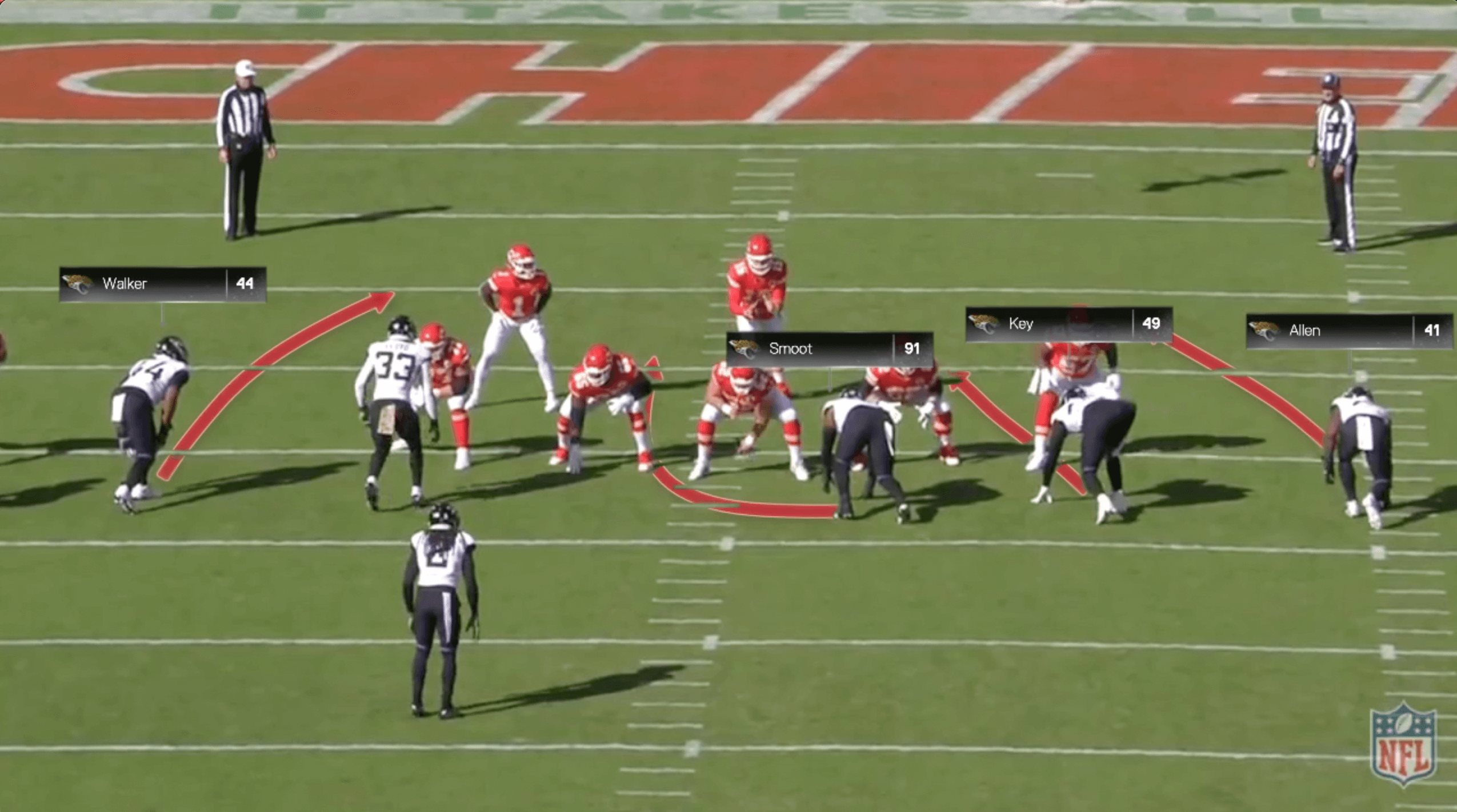 On third down, the Jaguars played man coverage with one safety deep and one safety playing robber 10 yards from the line of scrimmage, meaning they had no defenders left to act as a spy on Mahomes. The four-man rush had to contain him. The Jaguars lined up in an overload front with defensive tackle Dawuane Smoot lined up next to Arden Key inside. No. 1 overall pick Travon Walker was lined up on the left edge, and Josh Allen was lined up on the right edge. 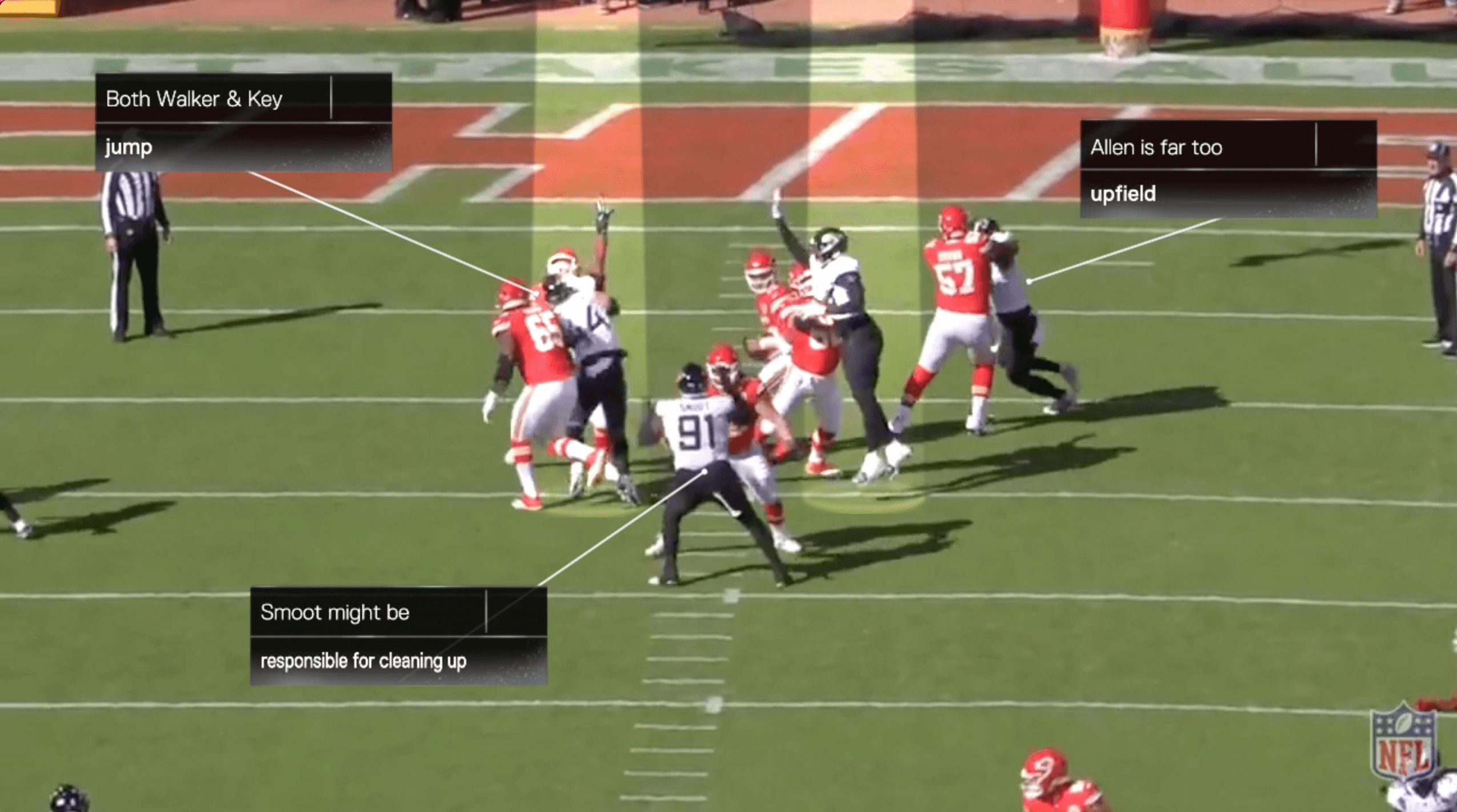 Walker had a nice bull rush and pushed the right tackle into Mahomes’ lap, but both he and Key jumped when it looked like Mahomes was ready to throw. Mahomes could have escaped the pocket to either side if he wanted to. 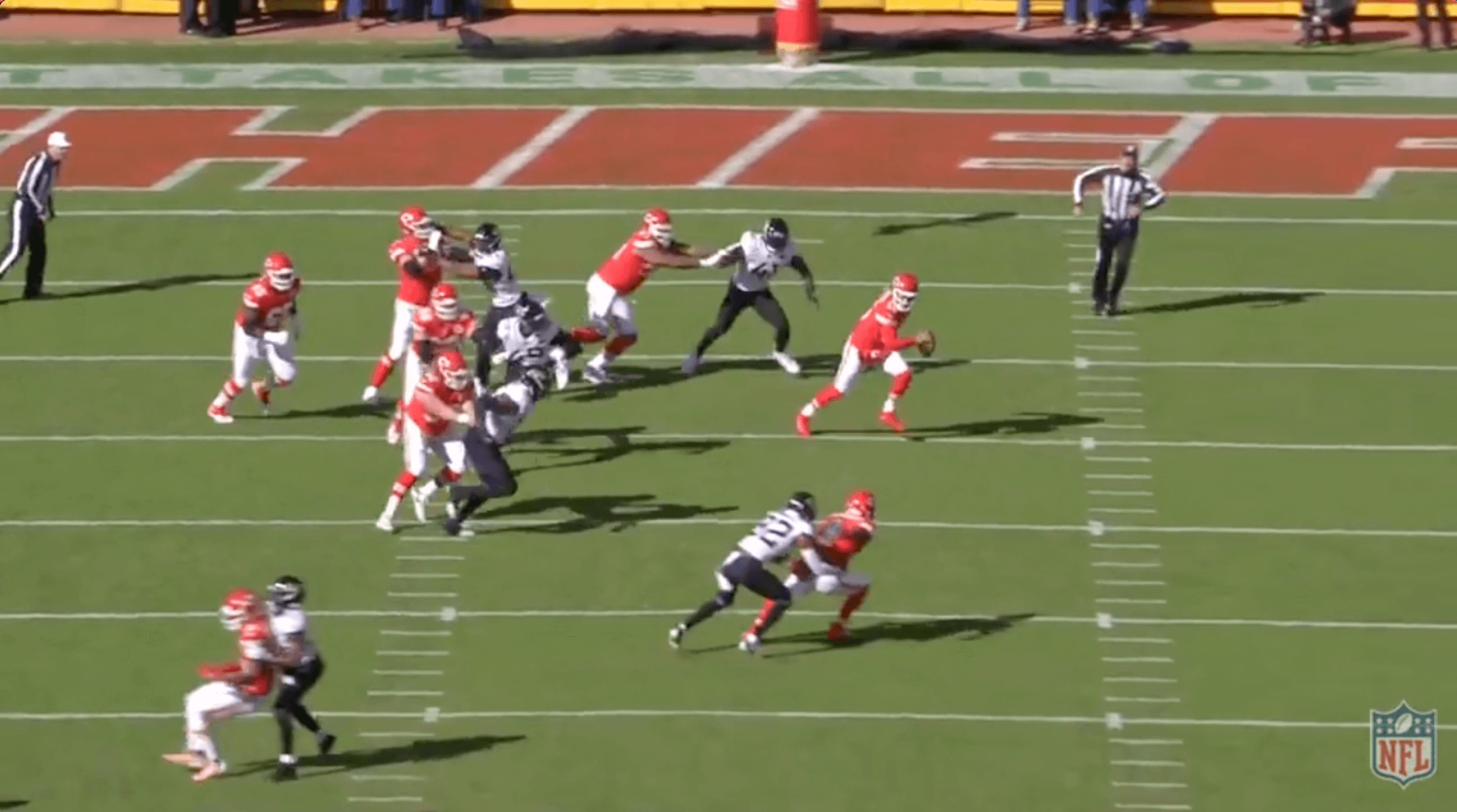 Once Mahomes broke the pocket, defenders in man coverage had their backs turned toward him, and he scrambled for 19 yards to move the chains.

There are strategies to contain Mahomes with a four-man rush that teams have had success with, such as “odd mirror,” in which the defense purposely flushes the quarterback to one side with a spy waiting. The Jaguars have an athletic front seven that could execute these concepts.

Mahomes can beat you in multiple ways, but you can’t let him do what he’s most comfortable doing, which is beating you from outside of the pocket.

Down to their second-string quarterback with one of the least talented receiver corps in the league, the Ravens had to lean on the option run game in the wild-card round, and the Bengals struggled to contain it. By success rate (57.6 percent), it was the Bengals’ fifth-worst run defense performance of the season.

“We’re excited to play normal football, not the triple option,” Bengals safety Jessie Bates said. “Now is the time to focus on Buffalo.”

How the Bills will make the most of 9 minutes of film ahead of rematch vs. Bengals

Bates probably shouldn’t get his hopes too high about not seeing option football again. It could stabilize a Bills offense that was terribly out of sync against the Dolphins while quarterback Josh Allen had one of his least efficient games of the season.

The Bills have thus far seemed reluctant to use Allen in the run game as much as they did last season. They could be taking a more cautious approach after his elbow injury in Week 9. By my count, they only called two true option or designed QB rush plays against the Dolphins. The first led to a 12-yard James Cook touchdown in the first quarter, and the other resulted in a 12-yard Allen run on third-and-8 in the third quarter.

The Bills will now face a much better pass defense in the Bengals, and if the Buffalo passing game continues to be out of sync, the Bills might not have a choice but to bust out the quarterback run game to move the ball efficiently. If the Bills do so, the Bengals will have to do a better job of playing assignment football than they did in the wild-card round.

NFL playoffs: Key matchups that could decide each divisional round game