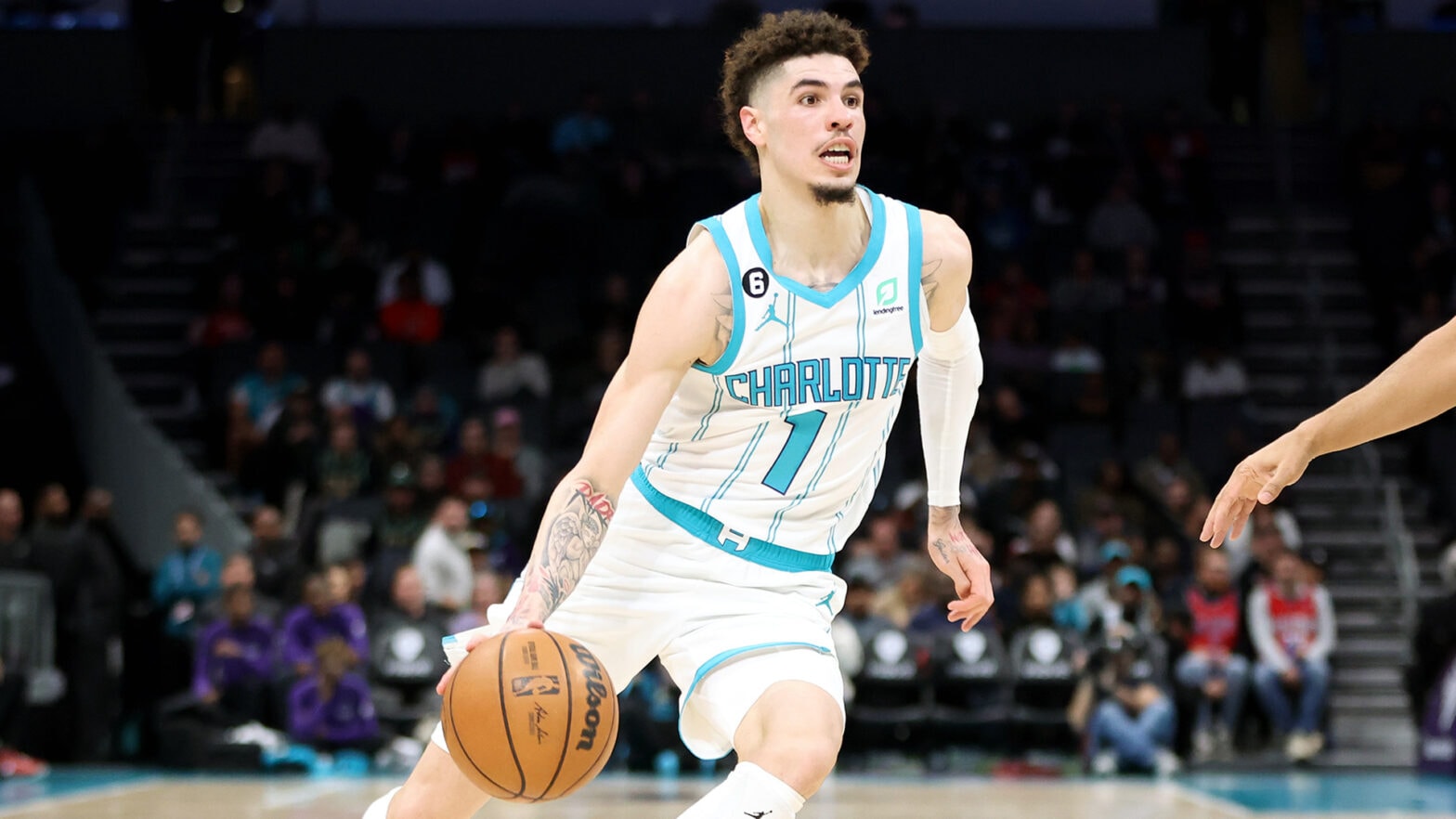 LaMelo Ball is finally back in action after missing 11 games.

Buckle up for a packed Friday with 10 NBA games. After going into OT Wednesday, the Knicks and Bulls will face each other again in Chicago. The Nets will also be in action on the road to play the Raptors and their 10-4 home record. Out West, the Lakers will try to continue working their way back into the playoff picture when they host the Nuggets. Anthony Davis has been the leader of their improved play by averaging 31.8 points, 14.0 rebounds, 1.3 steals and 2.4 blocks over his last 14 games. Let’s try to help narrow down the options on Yahoo by highlighting some players to consider for your lineups, as well as a few to possibly avoid.

LaMelo Ball, CHA vs. ATL ($35): After missing 11 straight games with an ankle injury, Ball made his return Wednesday against the Pistons. He wasn’t limited as he logged 34 minutes before fouling out. Ball also didn’t look rusty by posting 23 points and 11 assists. The Hawks have played at the seventh-fastest pace in the league and are missing one of their best defensive guards in Dejounte Murray (ankle), so Ball offers the potential for another juicy stat line.

Donte DiVincenzo, GS at PHI ($14): The Warriors are going to have to get by for a few weeks without Stephen Curry (shoulder). Jordan Poole should be the primary beneficiary of his absence, but DiVincenzo is also in line to receive more minutes. He’s scored at least 30.4 Yahoo points in three of the last four games and could provide significant value.

Shake Milton, PHI vs. GS ($20): Milton only produced 20.5 Yahoo points in his last game against the Kings, marking the fourth straight effort topping out at 21.6. He thrived when James Harden was sidelined, which made his salary increase significantly in DFS. But now that Harden has returned, Milton’s ceiling is considerably lower. His salary hasn’t declined enough yet to make him worth considering.

Julius Randle, NY at CHI ($36): Randle dominated the Bulls on Wednesday by posting 31 points, 13 rebounds and seven assists over 46 minutes. Over the last four games, he’s averaged 31.3 points, 11.3 rebounds and 4.3 assists while playing 36 minutes. With Obi Toppin (lower leg) out, expect Randle to receive all the minutes he can handle.

Bojan Bogdanovic, DET vs. SAC ($22): This matchup has the potential to be high-scoring as the Kings have played at the sixth-fastest pace and the Pistons with the second-worst defensive rating. Bogdanovic has been Detroit’s top-scoring option and is coming off back-to-back efforts where he recorded 47.8 and 33.8 Yahoo points. As long as the Pistons can keep this game somewhat close, Bogdanovic should receive plenty of opportunities to produce.

Bruce Brown Jr., DEN at LAL ($19): Brown is a more valuable player in real life than in fantasy. He’s starting and playing plenty of minutes for the Nuggets, who are currently without the services of Michael Porter Jr. (heel). But even in that role, Brown has only scored 24.6 Yahoo points or fewer in five of the last six games.

Domantas Sabonis, SAC at DET ($38): Sabonis continues to show his versatility by averaging 19.9 points, 13.4 rebounds and 6.4 assists from his last seven games. Always an efficient scorer, he’s taken it to another level this season by shooting 61.9% from the field. With how poorly the Pistons have played on the defensive end, Sabonis enters this matchup with an extremely high floor.

Onyeka Okongwu, ATL at CHA ($12): Murray isn’t the only starter who’s out for the Hawks as they’re also without the services of Clint Capela (calf), who’s going to miss at least the next week. Okongwu will step in to replace him, which makes him a great value play. Across the 13 games where he’s seen at least 20 minutes this season, he’s averaged 9.8 points, 7.8 rebounds, 0.9 steals and 0.9 blocks.

Myles Turner, IND at CLE ($28): Turner has managed some big performances of late, but hasn’t been consistent by only managing at least 33.8 Yahoo points four times from his last eight with no more than 27.3 from the other four. A matchup against the excellent defensive duo of Jarrett Allen and Evan Mobley could leave Turner with a muted stat line.

Mike started covering fantasy sports in 2007, joining RotoWire in 2010. In 2018, he was a finalist for the 2018 FSWA Basketball Writer of the Year award. In addition to RotoWire, Mike has written for Sportsline, Sports Illustrated, DK Live, RealTime Fantasy Sports, Lineup Lab and KFFL.com.