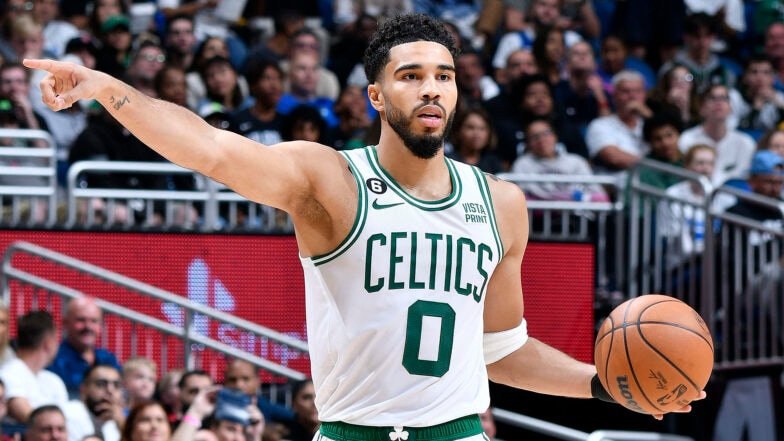 Jayson Tatum is among the elite players to target on Wednesday.

We’ve got another massive slate ahead for Wednesday’s NBA action, and FanDuel has a plethora of contests available for the 13-game offering.

NOTE: Ongoing injuries are excluded from this list. Please use your best judgment on injuries that have been on the docket for an extended period.

Dorian Finney-Smith ($4,4300) is playing well and tends to keep Wood off the floor already, so I suspect excellent work from him Wednesday.

Several players are listed as probable, but it would be wise to double-check. It’s an early game so information should be available well before lock.

If Vanderbilt stays out, Malik Beasley ($4,400) will start in his place.

Young could be back, but usage should funnel to Dejounte Murray ($9,900) if he remains out.

I like Jevon Carter ($3,800) as the player to benefit in Holiday’s absence.

Brandon Clarke ($4,200) will draw the start if Adams is unavailable.

We have no big surprises here at the top. Luka Doncic ($11,800) looks to extend his 30-point streak to 10 against the Magic, and although Giannis Antetokounmpo ($11,600) has an injury tag, he’s expected to play against the Thunder. Both opponents make great spots for Doncic and Antetokounmpo, but the Bucks may limit Antetokounmpo’s minutes. Doncic has records to play for, so he will play a full complement. I believe Doncic is so ironclad that I will use a Doncic/scrub approach to my lineups for this slate. As a result, my exposure to more elites will be minimal.

One top-tier player also worth considering is Jayson Tatum ($10,300) against Detroit. He has a great history against Detroit and is coming off a huge 39-point game against Memphis. At 10.3k, he will provide a solid and productive floor.

Expected Chalk and Other Targets

Ingram’s recent injury status has driven his salary down, but he’s back to his usual productive self, and we should take advantage while we can. Although the Pelicans lost to the Pacers on Monday, Ingram had a tour-de-force, with 29 points, six rebounds, two assists and two blocked shots.

Edwards is practically a fixture in my endorsements, and although his scoring is a little below his average over the past week, he’s bolstered his lines with decent secondary production, and it’s usually enough to put him in 30-FDFP territory. He needs a little more oomph to be acceptable, but his recent history against the Suns should be an indication that the upside could happen. He had 24 points and six rebounds against them eight days ago.

Vassell is once again putting up great lines after a six-game absence, and he’s hovered right around 33 FDFP in the three games since his return. That’s just a shot or a rebound away from matching value at this salary.

It’s such a great price for LaVine, and it’s probably due to being on and off the floor recently. LaVine returned from a one-game absence Monday and scored 30 points. With a day of rest, I doubt he’ll sit, and without an injury tag, he’s an excellent bargain Wednesday.

I like Terry Rozier ($8,000) in this spot as well, but you can get Oubre at significant savings. He’s very shot-dependent and won’t give you much in the way of secondary production, but if he is dialed in, he’s a cinch to provide value at $6,300.

As always, refer back to the injury section for some superb value pivots, especially Brandon Clarke, who is at a great salary if Adams is out.

Green keeps rewriting his milestones. He did it again Monday with a season-high 34 points. He is a scoring machine when dialed in, and even though you are dependent on a hot hand, he should get enough looks versus Toronto to be relevant.

With Kawhi Leonard injured, Morris is incredibly valuable. I think his worth will remain high all season, as Leonard will sit often when healthy, and the team will need an offensive shot in the arm as well as an excellent defender. Morris provides both, and although I’d like to see his salary a little lower, a bad shooting night can be assuaged with good secondary numbers from Morris. Scoring hasn’t been an issue lately, as he’s averaged 16.3 points per game over the last three games.

Since we are going to click on Doncic often, we need players like Horford to fill in the frontcourt slots. He has dual eligibility at PF and C, so he’s easy to fit in, and relative to this low salary, he’s producing well. He’s been consistently over 25 FDFP throughout the season, and that’s the 5x value threshold we look for when trying to go above 300 FDFP for the night.

Harris needed a little time to adjust to the larger role, but a string of mediocre games has placed his salary at this level. FanDuel didn’t raise it after a 14-point night, and Harris just needs 20 FDFP to be worth it. If he can replicate or outdo Monday’s production, we’ve made a great budget call.

Jeff has provided sports content for numerous sports outlets and has played fantasy sports since scores had to be tabulated via newspaper. He started working with RotoWire in 2017. Originally from South Carolina, he’s a lifelong Clemson fan now enjoying the sun in Los Angeles.