Monster Hunter Rise was one of my favorite games from 2021. I played dozens of hours on Switch and, in preparation for this review, gladly worked through the required Hub quests to make sure I was ready to dive straight into Sunbreak. Capcom’s new expansion is a great time for existing hunters with fun new monsters to fight and added flexibility to its combat systems, but the slow rollout of meaningful new content causes the experience to drag until the later stages of the main campaign.

Sunbreak takes hunters across a grand body of water, away from Rise’s Japanese-centric Kamura Village and into the European-inspired Kingdom region. There, a powerful trio of monsters called The Three Lords terrorizes the land, while other creatures from this area appear in far-off regions like Kamura, creating cause for hunters to take quests in the previously available Rise locations. Elgado Outpost, the new base of operations, is small and uninteresting, leaving little to do other than the necessary loop of crafting gear and preparing for the upcoming hunt. It merely serves the bare minimum of providing convenient vendors and quest givers, and while that’s all it really needs to be, I wish Capcom put as much care put into the environment as it did in Kamura Village.

The expansion shines in the proper monster hunts. Sunbreak introduces a handful of great monsters to complement the original roster from Rise but doles them out at a painfully slow clip. The big three creatures at the center of Elgado’s woes are Garangolm, Lunagaron, and the vampire-inspired flagship monster Malzeno. They serve as gatekeepers to stepping up through the levels of Master Rank questing, and each one offers a unique challenge in combat and awesome new gear to craft. However, to even challenge the first of these, I had to battle through a selection of monsters I’ve already bested many times since Rise’s release.

The expansion kicks off the new Master Rank difficulty with a new creature to the game, Damiyo Hermitaur, a returning hermit crab monster from an earlier entry in the series. Following that, the game then reverts to slightly harder renditions of the same hunts that are available in Low and High-Rank quests. The creatures have new moves and characteristics that add complexity and complications to well-known fights. Still, these missions are well-worn territory for experienced Monster Hunter players. I expected the existing roster to be utilized but starting off with a majority of slightly adapted old encounters is a boring way to begin what’s supposed to be an exciting expansion. With that being said, after hours of progression, more monsters arrive, and each one is a desperate and needed shot of variety to the slate of available hunts. Taking on The Three Lords, returning favorites Astalos and Seregios, and subspecies variants like Magma Almudron are fun and rewarding battles to master. 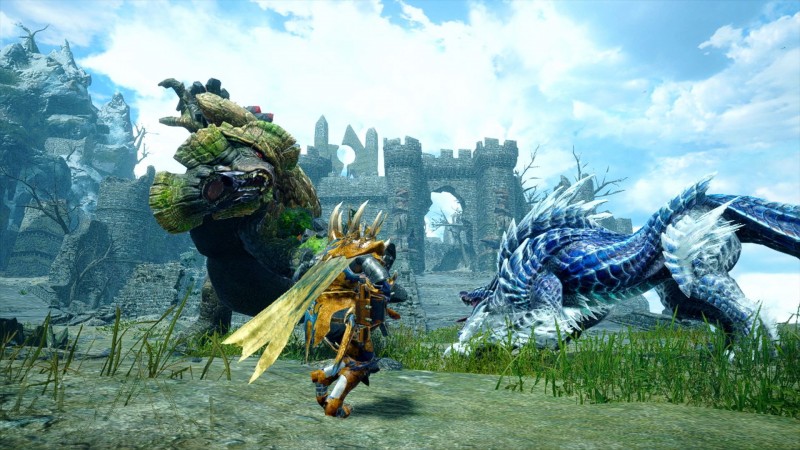 Monster Hunter’s environments are just as important as the targets themselves. Jungle, a stage from the second Monster Hunter generation, makes its return to Sunbreak. For many, it will be a fantastic piece of nostalgia, but after a few hunts, it starts to feel small and uncomplicated compared to other locations in Rise. Another new, more critical arena addition called The Citadel features all kinds of little enclaves and paths that make the region seem dense with traversal and tracking options. It’s also full of various biomes like a dreary resin swamp that slows monsters and hunters alike, a cave gleaming with the sheen of a coating of ice, and a crumbling castle that makes battles with Elder Dragons and other massive monsters feel all the more epic. New endemic life like Marionette Spiders can trip up monsters, and insects that affect Wyvern Riding are scattered throughout all of the maps, introducing fun new strategies to deal with monsters on a hunt.

Bumping up the difficulty to Master Rank will naturally make things harder on players, but each iteration of Monster Hunter also brings needed quality of life changes. Switch Skill Swap offers a way to change up your weapon-specific attacks on the fly in combat. You can equip five moves to two loadouts, and by pressing a series of buttons, switch between the two sets of maneuvers whenever you feel the need. I’d keep my most reliable hammer skills applied to my main set of Switch Skills, and when I need a specific Silkbind attack to advance on a monster quickly, I can swap them out to utilize my extra kit of moves. I love the flexibility Switch Skill Swap provides and the agency it offers players to mold a preferred playstyle into the typically rigid weapon archetypes.

More quest variety is available through the new single-player-only Follower Quests that let me take the various characters from around Elgado Outpost and Kamura Village out on hunts. Guest hunters like Lady Fiorayne and Admiral Galleus have specific weapon specialties and can join hunters on these quests. I was hoping these missions would add a new narrative twist to Monster Hunter, but outside of having an NPC fighting alongside me, occasionally quipping throughout, Follower Quests play out like any other average hunt. However, they help in learning how to take on new monsters and often act as a training mission rewarding monster materials to craft gear for harder solo tasks.

I’ve had a great time with Sunbreak overall. The lack of new monsters plagues the early hours, but there’s plenty to love if you keep at it. The added flexibility of the Switch Skill Swap system is a freeing and fun expansion to combat for hardcore hunters and the new creatures in the Master Rank quests – when you get to them – breathe life into the experience. For someone already invested in Monster Hunter, there’s plenty to love in Sunbreak. Just don’t expect to see a lot of new content in the opening hours.