JPMorgan China Growth & Income (JCGI) has published its annual results for the year ended 30 September 2022. During the period, JCGI provided an NAV total return of -36.7%, underperforming the MSCI China Index, which declined 22.0%. The Company delivered a return to ordinary shareholders of -38.5%, reflecting a widening in the discount at which the shares traded over the 12 month period. This market sell off during the period hit JGCI’s portfolio performance. JGCI had an average gearing of 15.6% throughout the financial year and this additional exposure to the declining market was the single largest source of performance detraction, after stock selection. Furthermore, JGCI’s large exposure to growth sectors and stocks, particularly health care, technology, and communication companies, was a key drag on performance, as was the structural underweight position in low-growth sectors, in particular energy and financials, as these sectors outperformed over the period. 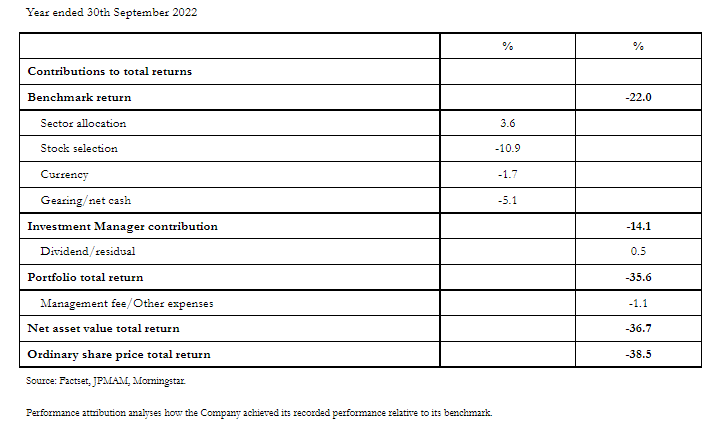 By sector, JGCI’s overweight exposure to Health Care detracted from performance. WuXi Biologics, a contract research company, was negatively affected by supply chain disruption resulting from increasing geopolitical headwinds. In addition, Broncus Holding Corp and Venus Medtech, producers of medical devices, were negatively affected by pricing pressure from the Chinese government’s procurement programme. JGCI’s managers trimmed the positions in WuXi Biologics during the year, but it remains a top 10 holding given its continued competitiveness and the current valuation.

Technology is another sector that hurt JGCI’s performance. Key detractors over the period included Silergy Corp, a semiconductor manufacturer, Sunny Optical Technology, a producer of optical products and scientific instruments, and Kingdee International Software Group, which provides business software. The managers have largely maintained these positions due to their positive long-term prospects, which are supported by increasing import substitution and market share gains.

Within Communication, JGCI’s position in Bilibili, a gaming and multimedia company, was a key performance detractor. It was hit by delays to approvals for new on-line games and by a slower than expected advertising business ramp-up, due to weak macro-economic conditions. The managers reduced JGCI’s exposure.

Although JGCI remains underweight in Real Estate, an overweight position in Country Garden Services, a property management company, detracted from returns due to concerns about slower new property sales and the solvency of its parent company, Country Garden.

Financials also detracted from performance. The managers have avoided exposure to large state-owned banks such as China Construction Bank Corporation and Bank of China because their long-term growth prospects are not promising. However, these names tend to trade more defensively than the overall market, given their undemanding valuations and dividend support, and this helped their relative performance over the review period. 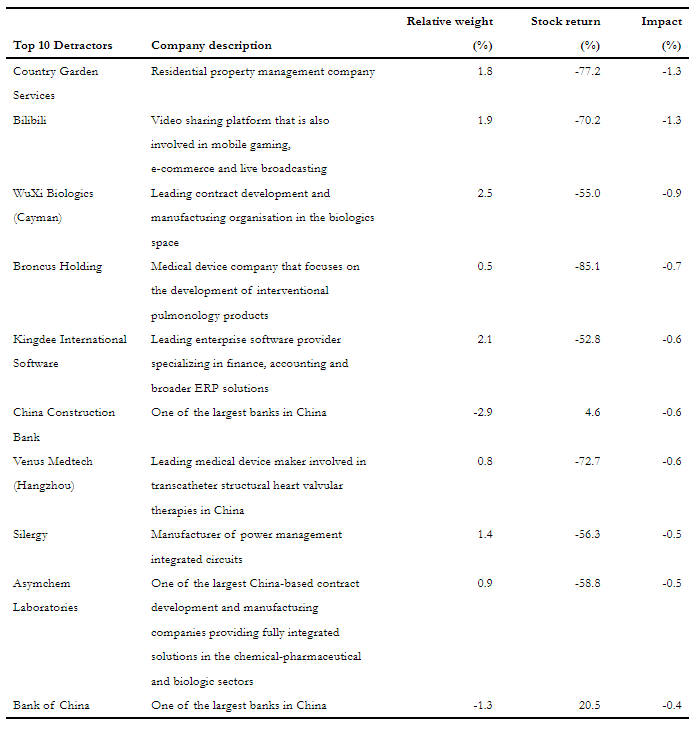 Positioning decisions that enhanced returns over the period included the significant overweight positions in Renewable Energy. Tongwei, a producer of polysilicon used in solar panels, and Suzhou Maxwell, a solar cell manufacturing equipment maker, were amongst key performance contributors thanks to strong demand and technology innovation in the sector.

The managers chose to exit Alibaba on the view that the company is unlikely to return to its previous high growth territory, due to some tightening in the sector’s regulatory environment. This underweight position contributed to performance over the year. 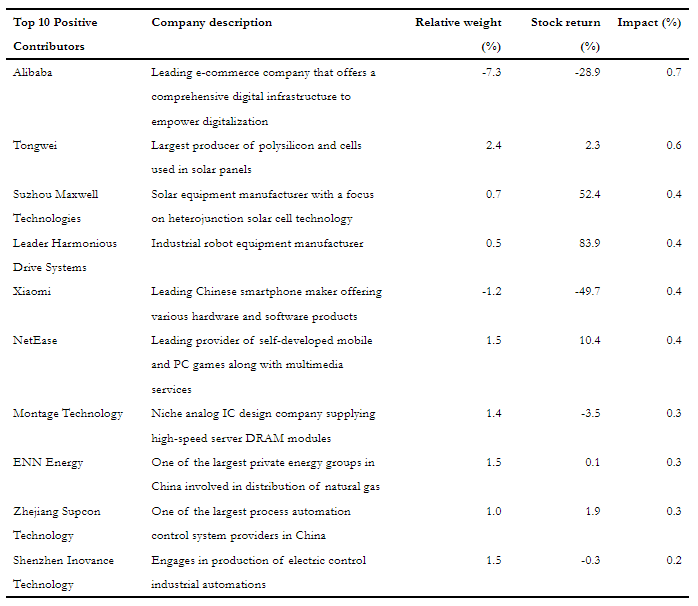 The managers say that, despite the challenging macro environment and geopolitical uncertainties, they continued to focus on identifying bottom-up stock opportunities that can provide JGCI’s shareholders long-term growth and return. They say that the most noteworthy increase in exposure over the past year has been to Industrial names. The portfolio’s overweight exposure to this sector has almost doubled to around 13% as the managers expect it to benefit from China’s push to upgrade its manufacturing performance and realise its ambitions to achieve carbon neutrality and self-sufficiency. New positions were initiated in several industrial companies, including Suzhou Maxwell, as mentioned previously, ZhuZhou CRRC Times, a manufacturer of railway equipment, Beijing Haufeng Test & Control, a semiconductor testing equipment producer, and DBAPP Security, a supplier of cybersecurity software and solutions.

The managers say that market volatility over the past year has not been entirely bad news, as it has created opportunities for them to purchase other companies across various sectors where they see structural growth opportunities at particularly attractive levels. Examples include e-commerce operator JD.com, which is now a top 10 holding, ZTO Express, a freight and logistics company, and Trip.com, an accommodation and travel services provider. The managers also took advantage of low valuations to top up existing holdings in a number of companies they favour, including software supplier Beijing Kingsoft Office, Kanzhun Ltd, a staffing and employment services company, Zhejiang Supcon Technology, which provides automation and IT products, and Advanced Micro-Fabrication, a producer of semiconductor equipment and materials.

In terms of sales, in addition to reducing the sizes of several holdings mentioned above, the managers sold JCGI’s entire positions in companies that are likely to be adversely impacted by China’s growth slowdown. In addition to the entire sale of JCGI’s stake in Alibaba, other disposals included restaurant owner Jiumaojiu, auto manufacturer Nio and toy maker Pop Mart International, all of which they say are likely to feel the effects of weaker consumer spending. However, the portfolio’s overall underweight to the consumer discretionary sector remained broadly unchanged over the year. The challenging outlook for the real estate sector also prompted exits from Xinyi Glass and Skshu Paint Co.

In addition, the managers sold JGCI’s holdings in IT infrastructure company Sangfor Technologies, and electronic components manufacturer BOE Technology Group. JCGI also exited several health care names, including Everest Medicines, a biotech company, and Suzhou Basecare Medical, a medical devices company. The portfolio’s overweight positions in Information Technology and Health Care remain, although they are less significant than previously. The managers have maintained the portfolio’s substantial underweight to financials and its smaller underweight to Communications Services.

JCGI’s portfolio continues to have no exposure to traditional Energy producers, reflecting both the managers’ concerns about ESG factors and these companies’ poor long-term growth prospects. However, the managers increased JCGI’s exposure to utilities modestly, in part via a new position in hydropower company China Yangtze Power, because of its stable operations and the expected asset injection that is earnings accretive.

These portfolio adjustments have resulted in some changes to the Company’s top 10 holdings over the past year. Tencent remains JCGI’s largest holding, comprising 8.4% of the portfolio at 30th September 2022. This positioning is underpinned by the managers’ belief that the company’s core competitiveness in social media and gaming remains unchanged despite regulatory and macroeconomic challenges. On-line retailers Meituan and Pinduoduo, along with WuXi Biologics and China Merchants Bank, also continue to feature amongst JCGI’s largest holdings, but there are several new names. In addition to JD.com and Suzhou Maxwell, mentioned above, JGCI’s top 10 holdings now include NetEase, a gaming and multimedia company, and Beijing Kingsoft Office Software, a leading software and internet services company. 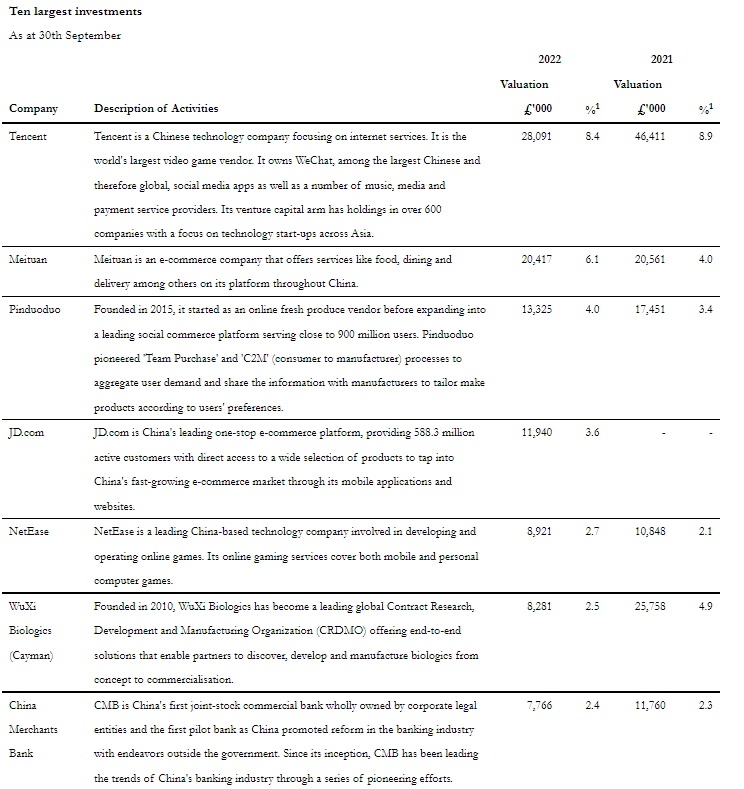 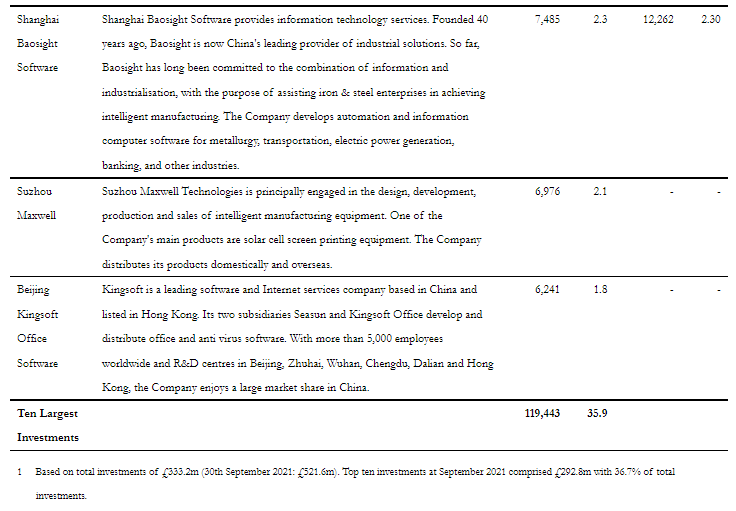