According to the Department of Corrections (DOC), more than 13,100 individuals are released from prison annually after completing their sentence, and one of the most frequent barriers to successful reentry in the United States is the lack of employment.

The Governor said, to support our booming economy, fuel our workforce and reduce the chances of someone returning to prison, those transitioning out of prison need a good-paying job. 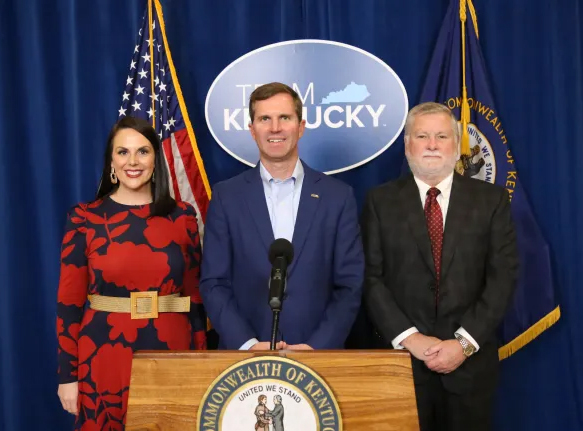 “My faith teaches me that there are second chances in this life and that we are all our brothers’ and sisters’ keepers,” Beshear said. “I am proud of the work we have done to grow a strong economy and achieve a historically low recidivism rate, and today we are doing even more to support job growth with a new Prison-to-Work Pipeline program and a virtual learning job skills program for inmates returning to society.”

In August, Kentucky led the entire country in new job growth, and in September the state tied for first. From September 2021 to September 2022, Kentucky added more than 80,000 new jobs. That’s the largest number of new jobs added in 20 years. For the first time ever, the commonwealth also posted record-low unemployment rates for the longest consecutive stretch on record, holding at or below 3.9% since April 2022.

The administration is partnering with the Kentucky Chamber of Commerce to launch the Prison-to-Work Pipeline at all 13 state prisons and 19 local jails that house state inmates. Businesses located throughout Kentucky’s 120 counties will virtually interview inmates with the goal of the inmate being offered a start date before returning to society. Inmates will receive resume writing assistance and job interview preparation prior to their interviews.

“Investing in individuals upon their return to society is an investment in the future of Kentucky,” Secretary Harvey said. “Many individuals come to corrections broken, addicted, or without vital resources to overcome the many barriers they have encountered along the path to incarceration. And today, we take a step forward in breaking those cycles.”

“The Kentucky Chamber of Commerce has long been an advocate for addressing the state’s low workforce rate, and we see advancing career opportunities for individuals with justice-involved backgrounds as one step in this process. Not only are we able to connect individuals in need of employment with employers looking for candidates, but we are able to connect individuals in industries where they have prior experience and skills,” Watts said. “We are excited to see how this initiative allows employers to tap into a new workforce of people ready and willing to work.”

Below is a video message from a former inmate and a Kentucky employer who have successfully been matched through the Prison-to-Work Pipeline. Employers interested in participating in the program should contact the Kentucky Chamber.

The Governor announced that the administration is now offering a new virtual learning job skills program. By learning to overcome challenges through this virtual learning experience, inmates will develop the resiliency, perseverance and confidence needed to overcome real-life obstacles and help them answer job interview questions.

“This is a very exciting project for our administration as it is the first of its kind in the department,” DOC Commissioner Cookie Crews said. “It presents an opportunity for our population to prepare for employment and be interview ready upon release from custody.”

The job readiness simulation was created by Marquis Software Development and SimCoach Games.

Ben Harrell, director of Marquis sales and marketing, said, “We believe this will make a difference in peoples’ lives and ultimately reduce recidivism.”

The program is offered to inmates at Kentucky Correctional Institution for Women and Luther Luckett Correctional Complex who are nearing the completion of their sentence. The administration plans to expand the program statewide in 2023.

Other Efforts to Remove Workforce Barriers

The Governor continues to note that, as expected, many baby boomers have retired over the past several years, which is a significant reason why the number of Kentuckians not in the workforce has increased. In addition to today’s announcement, Gov. Beshear and his administration continue to work to remove workforce barriers for Kentuckians affected by addiction or incarceration and those who need access to childcare.

On his third day in office, Gov. Beshear restored voting rights to Kentuckians who had completed their sentences for nonviolent, nonsexual offenses. Now more than 187,000 Kentuckians’ rights have been restored.

The administration launched a statewide project that provides transportation to former inmates so they can get to addiction treatment, job interviews, education and employment. The program currently helps nearly 50,000 Kentuckians. Barriers to reentry have also been removed by tasking DOC to issue employability certificates to those who successfully complete programs while incarcerated.

For those suffering from addiction, in September 2021, Gov. Beshear announced the commonwealth had launched a new initiative to help employers address addiction, boost hiring and retention and support employees in the workplace.

In October, Gov. Beshear announced a new initiative to help boost workforce participation by improving health coverage in the critical areas of dental, vision and hearing.

To help remove the barrier of access to childcare for those in the workforce, most recently, Gov. Beshear’s pushed for the passage and funding of universal pre-k, which has proven to be the fastest way to improve the maternal workforce and the way to ensure every Kentucky child is kindergarten ready.