When Floris Wardenaar tunes in to the upcoming World Cup soccer matches starting Nov. 20 in Qatar, his focus might be a little different than the average viewer, especially during the breaks in play.

Wardenaar, an assistant professor in the College of Health Solutions, will have an eye out for what goes on during stoppages when the matches get underway. Wardenaar is one of the authors of a new paper on hydration opportunities during the FIFA World Cup. 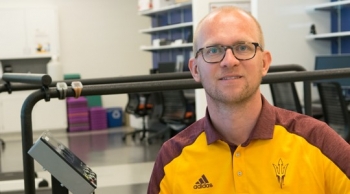 College of Health Solutions Assistant Professor Floris Wardenaar is one of the authors of a new paper looking at how players are staying hydrated during World Cup soccer matches.
Download Full Image

The idea for the paper came from conversations with Josh Beaumont, a former athletic trainer with the ASU women’s soccer team.

The researchers looked at recordings of the 2018 World Cup tournament in Russia to get an idea of what kind of opportunities players had to stay hydrated during games.

Wardenaar noted that the climate in Qatar is considerably warmer than Russia — which is why the tournament that is normally held in summer had been moved to late fall — but the difference in seasons could provide for similar conditions even as a result of this change.

“Even though that sounds nice, here in the Phoenix area we all know that even winter can be quite warm, especially when the sun shines,” Wardenaar said. “Looking at the situation with Qatar and this upcoming world championship, I figured out that the conditions could be pretty similar to the last World Cup.”

Wardenaar credits Jennifer Vanos, assistant professor in the School of Sustainability at the College of Global Futures, with help in pulling those calculations together.

Wardenaar and Vanos found that players took the opportunity to take a drink during roughly only a third of the stoppages in play due to substitutions, injury or video reviews by the officials. That behavior didn’t seem to increase much under hotter conditions.

What was somewhat encouraging, however, was that players sometimes took opportunities to take a drink without waiting for the play to stop.

Wardenaar said he hoped teams and officials would use the data from this study to develop strategies to keep players better hydrated during matches.

He said the limitations to that plan is that those VAR breaks only happen during some games. To offer more breaks in other games, officials could also stop play in matches held in hot weather to allow another opportunity to take in fluids.

He said the UEFA Women’s Euro 2022 championship in England was a good example of referees working in hydration breaks.

Teams could also make sure that water or other fluids were available along the sidelines or in the goals to allow players to get a quick drink during informal stops.

Recreational soccer players can benefit too

Soccer is a popular sport in the Phoenix area, and players could encounter warm weather at almost any time of year, not just extreme conditions expected in the notoriously hot summer months.

“Especially recreational players in tournaments where you could play multiple games in one day,” Wardenaar said. “Starting out well hydrated is the important thing. Make sure to drink enough during the day before the actual tournament starts.”

Wardenaar said being well hydrated wasn’t the same as over-drinking, or chugging a gallon of water at a time.

“Try to be mindful,” he said. “Look at the color of urine, preferably at the start of the day. It should be light. And make sure to maintain a good fluid intake (during matches).”

Wardenaar and the other authors of the study hope their findings inspire the development of a strategy to stay better hydrated during physical activities such as soccer. And with the eyes of the world on the matches taking place in Qatar, it would be great to see some of the top athletes on the planet modeling that behavior.

“I shared this with one of the national team dietitians who will play at the (World Cup) championships, and she said she really liked this because it shows the importance of targeting drinking moments,” Wardenaar said. “She said she would bring it to the attention of the coaching staff so they could strategize better. That’s the reason I do this kind of work: to help colleagues in the field to gain more insight or new tools to do their work in a better way.”