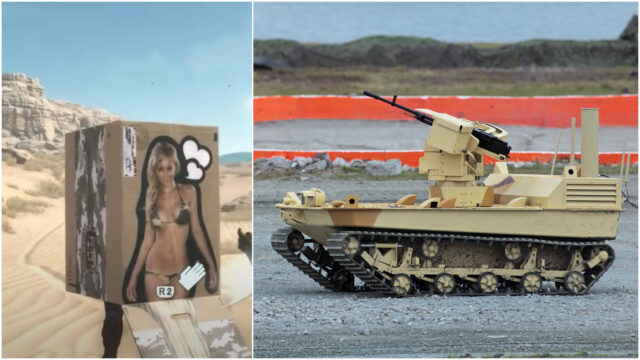 A team of US Marines used a tactic seen in Metal Gear to defeat an advanced military robot.

In games in the franchise, players are able to hide from enemies using cardboard boxes. The strategy has also been adopted by real soldiers.

Shashank Joshi, defence editor at The Economist, has published excerpts from an upcoming book on the use of artificial intelligence in the military.

Also read: What THeMIS, the robot Ukraine received for which Russia is paying a $16,000 reward, is doing

The author, Paul Scharre, recounts a story about a group of US Marines used to improve a robot’s human-sensing abilities.

For several days, soldiers moved around the robot, which kept collecting data. These were used to improve the algorithm. Then the Marines were asked to trick the robot instead of helping it.

It didn’t detect them, even though they giggled the whole time.

The eight soldiers took the robot into the middle of a roundabout and invented a game: whoever could get the fastest approach to it from a distance without being detected won. The algorithm was defeated several times, by various methods. One Marine hid behind a shopping trolley, which he approached slowly, another pretended to be a tree, and two soldiers hid in a large cardboard box, just like in Metal Gear.

Also read: U.S. soldiers experience vomiting spells when using Microsoft-ordered AR headsets. They say they would be killed in a real combat scenario

“You could hear them giggling all the time,” one witness said.

The robot’s algorithm failed because it was trained to detect human movement, not shopping carts or slowly moving cardboard boxes. This is more evidence that robots won’t be replacing humans in all jobs anytime soon. Let’s not forget that “AI journalists” aren’t doing too well so far either.