A national champion stands upon family and community 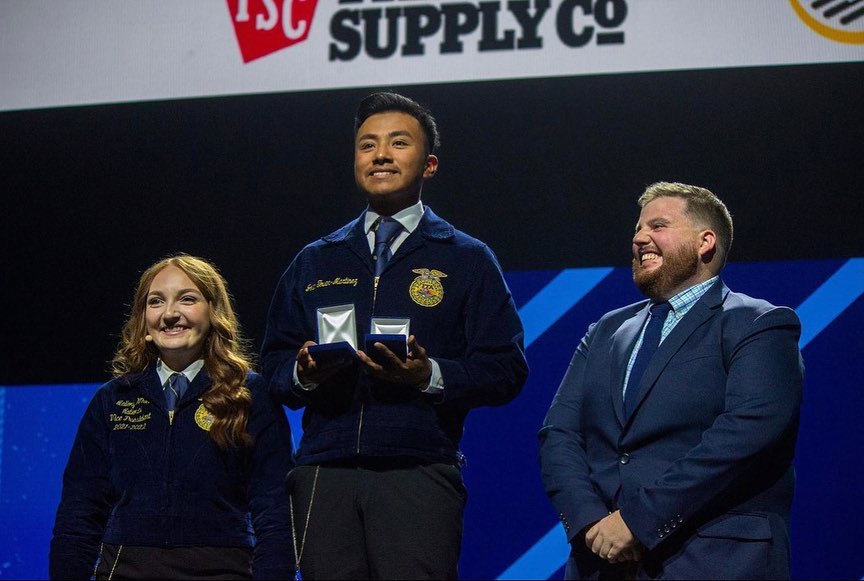 Joan Tovar-Martinez came back home to Sumter County a national champion. It is the culmination of work dating from 2019 to current. He has gathered, researched, submitted, learned where he could be stronger, relied upon strengths, gave his best, and then polished up his best. The stuff of champions to be sure.

Joan is a senior at Sumter County High School. He is also enrolled at Ignite College and Career Academy. He stands firm on his birthright given to him by his mom, Dulce Martinez, his dad, Wenceslao Tovar and his grandfather, Benito Tovar. Wenceslao and Benito he credits with instilling in him a work ethic required of national champions. Both men are in agriculture. Benito can be remembered for farming strawberries in Sumter County. Wenceslao has been working for Minor Brothers’ Farms for 25 years. It was the Minor brothers who invited Joan to come get a taste of agriculture just as his dad and grandad have. Joan found working with his dad, grandad and uncle to be interesting work, but he had no desire to have an agricultural career.

Joan had every intention of entering the healthcare field, specifically an EMT. Once Ignite College and Career Academy (CCA) opened their doors, he enrolled in a healthcare class. Ignite is designed to both open and close doors. Both are equally important, and Joan is a perfect example. Ignite allowed Joan to see exactly what it would be like to make himself a spot in the healthcare field, and he realized it wasn’t a spot he wanted to pursue. Joan says of healthcare, “This is not for me, so I went to an agriculture class. I ended up knowing about the Young Farmers Program from John Minor and I went to the first meeting they ever had in Sumter County. From there I felt a spark that this is what I wanted to do.  Even though I grew up in agriculture, I wanted to get away from it—but it was a passion. I joined FFA and Mr. Pope (CCA Agriculture Education teacher) and Mr. Gentry (Advisor, Young Farmer Association) told me about the SAE (Supervised Agricultural Experience) where I could keep a record of what I did at work and put it into a category, which is grain production, and once I won south region, I knew this is what I wanted to do as a career. After I won state, I was sure this is what I wanted to do.” 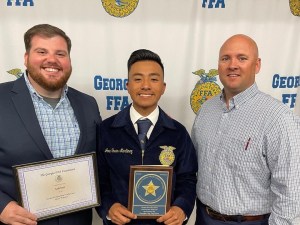 Ignite is intentional about getting students to where they will have the biggest impact. Although the EMT desire was quelled, it was not bad news. As Josh Drew, the CTAE Director states, “The great part about Ignite is he was able to enter into the (healthcare) class and figure out that wasn’t what he wanted to do, so he changed course—and look where he is now! That’s the great part!”

So where is Joan now? He is an elite in the agricultural field. He is the national champion of the Grain Production Proficiency Award (GPPA). Although he has been familiar with agriculture, Georgia’s number one economic producing field, in 2019 he signed on with Minor Brothers’ Farms through Ignite’s Work Based Learning Program as a regular support and employee. He remains employed with Minor Brothers through Ignite’s Work Based Learning program. This means on top of bringing home a paycheck, he also is earning school credits towards graduation while also building a resume which will prove beneficial not only for his college aspirations but for future employment as well. Joan decided to document his 2019-2022 experience in a 30-page application for the GPPA. He documented his growing knowledge of the field and how his job responsibilities changed. He wrote how his classroom lessons could be applied on the farm and he documented with photographs his lessons as he went.

The application was submitted to FFA’s Southern Region for consideration. Joan’s application was deemed the best in our region. But as students do, he was intentional about making his application even better for the state competition. As he polished his written application, he also polished his interviewing skills. Joan reports he “was given feedback and they told me what to work on, so I could improve for the next interview.” Out of the four regions of FFA, Joan brought home the state win. The process would start all over again as he looked forward to the national competition. Another polish job was done on his application and then he sat through several mock interviews to get better and better at presenting his experience. Joan reports the community “helped me a lot.” Among some of the community which invested in Joan were Jimmy Whaley, Magnolia Manor, Reid Brothers and Georgia Power. They all mentored him in how to give the best presentation of himself. Joan gives great credit and gratitude to the companies for investing in him and not being afraid to say where he could improve, and also what they would like him to keep doing. While it is a gracious gift to offer their expertise in helping Joan, it is not unusual. This community collectively came together to make the CCA happen. The man hours put in by hundreds of locals where numerous and one of the most unifying events in Sumter County history.

Those mock interviews and consistent polishing of his application proved to be of great importance. After winning the state championship, his application went through a culling process until four FFA members were left standing. There was one final interview in front of him before he would travel to Indianapolis, Indiana for the announcement of the national champion.

When it came time to do his interview, he met with the panel of judges through a virtual conference call. While he was in the room alone for the interview, there were people with noses and ears against the doors. Ben Pope, Phillip Gentry and Don Gilman were hungry to hear every word. When it was over, the interlopers discussed the outcome. Ben Pope relayed to the others, “We have this in the bag!” Josh Drew reports he received calls saying, “He just won it! Just by the interview!” Ben follows with saying the greatest response given was Joan’s indication of how important making mistakes and learning from them was. When Joan’s name was announced on stage, Ben Pope pushed him forward to stand in the spotlight rightfully earned. Joan reports, in the moment of learning he was the champion, “I didn’t know what to say, I was speechless!” Back at home there were gasps, yells and alleluias.

So, what does a national champion do from here? He keeps pressing on. Through his work-based learning program, he leaves school at 1pm to work. It is not unusual to stay at work until 10pm. On weekends he typically works 7am to 10pm. Joan is correct in saying he learned a solid work ethic from his dad and granddad. This semester on top of working “farmer hours” he is also enjoying all A’s. His championship, his work, and his grades will make his application to Abraham Baldwin Agricultural College a bright one. Joan wants to invest in agricultural technology which will help increase yields. He wants to “help farmers be better and more profitable across the US.” One of the ways he hopes to do that is by making technology friendly to those workers who don’t speak English. He wants to help “companies get new technology to others, because it can be hard to navigate. It could help Hispanic workers to be able to translate and utilize the newest technology.” Joan has a heart for immigrant workers. He sees their place to be very important not only on the farm, but for the better of agriculture and communities in general. 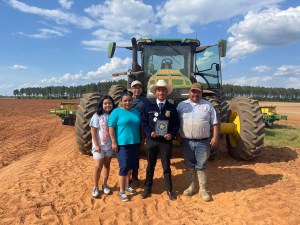 When asking Joan what advice he would give, he says, “Take opportunities everybody offers. This school offers so many opportunities to see what you want to do as a career. Ignite is really beneficial to students because it opens doors and closes doors you don’t want to go through.” He also wants it known how grateful he is to Ben Pope, Phillip Gentry, Josh Drew, Betty Suggs, Don Gilman, Minor Brothers, Reid Brothers, Georgia Power, Jimmy Whaley, Magnolia Manor, his mom, his dad, his grandad, his uncle and his siblings for investing in him.

Don Gilman, the CEO Ignite CCA sees Joan’s championship coming to fruition for several reasons. “Ignite is so very proud of Joan. He is a fine example of our CCA. He invested himself fully. As has been the case from the beginning this experience was built upon family and community support. Each student has an opportunity in front of them, Joan took advantage of those opportunities and because of his willingness to follow his strengths, he now adds ‘nation champion’ to who he is. His experience is what Ignite and this community is all about.”

A national champion stands upon family and community – Americus Times-Recorder