UiPath (PATH 1.93%) went public at $56 per share last April, and its stock skyrocketed to an all-time high of $85.12 a month later. But today, the automation software provider’s shares trade just above $20.

In early June, a few positives appeared in UiPath’s first-quarter results, which exceeded analysts’ conservative estimates. However, its forecast for 22% sales growth in fiscal 2023 (which ends next January) would still represent a significant deceleration from its 47% growth in fiscal 2022. 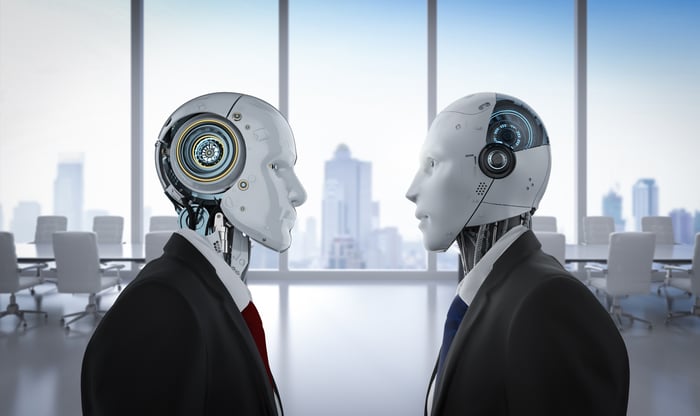 Furthermore, UiPath’s gross margin is still contracting, its losses are widening, and its share count continues to rise. That’s why I told investors to avoid chasing UiPath’s post-earnings pop. But today, I’ll take the contrarian view and examine three green flags for UiPath’s future instead.

In the first quarter of fiscal 2023, UiPath narrowed its GAAP operating loss from $236 million to $116 million, but it also posted a non-GAAP operating loss of $11 million — compared to an operating profit of $16 million a year earlier — as it paid out its annual corporate bonuses and sales commissions.

UiPath’s increasing headcount made sense when it was growing like gangbusters, but it needed to rein in those expenses as its growth cooled off. So on June 24, the company announced it would lay off approximately 5% of its global workforce by the end of the second quarter of fiscal 2023.

UiPath says that workforce reduction will simplify its go-to-market approach with “better market segmentation, higher sales productivity, and best-in-class customer experience and outcomes.” It expects to incur about $15 million in restructuring expenses, which will be fully recognized by the end of fiscal 2023, but that move might help streamline its sprawling business.

2. A (slightly) brighter outlook for the full year

After announcing its upcoming layoffs, UiPath updated its guidance with a target of $15 million in non-GAAP operating income for fiscal 2023.

That’s at the high end of its previous operating income guidance of $10 million-$15 million, but it would still represent a staggering decline of 80% from fiscal 2022 and reduce its full-year non-GAAP operating margin from 8% to about 1%.

That slight improvement indicates it’s gradually streamlining its business, but UiPath didn’t raise its top-line guidance. It also still expects its ongoing cloud infrastructure investments to continue squeezing its non-GAAP gross margin, which dropped from 90% in fiscal 2021 to 87% in fiscal 2022, then slipped again to 85% in the first quarter of fiscal 2023.

Therefore, UiPath might need to execute a few more rounds of layoffs to right-size its business as its top-line growth decelerates. Doing so could also rein in its stock-based compensation expenses, which gobbled up a whopping 41% of its revenue in the first quarter of fiscal 2023.

Ark’s ETFs boosted their cumulative holdings in UiPath by more than 260% over the past 12 months — even as its stock price plunged nearly 70%. The stock is now the fourth-largest holding in Ark’s flagship Innovation ETF.

That bullishness indicates that Wood, who mainly focuses on disruptive growth stocks, still believes in the long-term growth potential of UiPath’s software.

But investors should also take that bullishness with a grain of salt, since all of Ark’s funds have significantly underperformed the S&P 500 this year as rising interest rates torpedoed the market’s pricier growth stocks.

I’m not turning bullish on UiPath yet

UiPath might continue to grow over the next few years, but its job cuts aren’t deep enough and Ark’s big buys are arguably flimsy votes of confidence. Therefore, I’m reiterating my previous call on UiPath’s stock: It’s simply not worth buying when so many other promising tech stocks are still on sale.